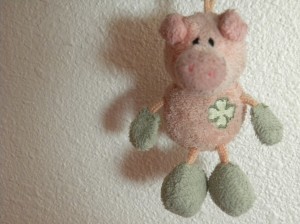 Next to GinnyVan, Andre Segovia is my oldest buddy.  Please don’t confuse my Andre Segovia with Andres Segovia, the late classical guitarist.  I mean, look at Andre’s feet; do they look like they could pick a guitar?  With those limbs, he can’t even deliver a proper hug but he is good company nonetheless.

GinnyVan and I had been companions for about a year before Andre joined our traveling circus.  I remember our first meeting well.

It was late 2006 and GinnyVan, Michael and I were in Segovia, Spain at the beginning of an extended European adventure.  Segovia is known to foodies as a center of roast suckling pig consumption.  We couldn’t pass the window of a restaurant without seeing some plump, and very dead, suckling pig displayed with some piece of fruit in its mouth.  GinnyVan and Michael succumbed to the siren call of crispy pork (I stayed buried in GinnyV’s purse).  But then, a strange thing happened, and even as they were wiping the remnants of their meal from their lips, they were overcome with remorse.

At the very next sidewalk stall that was selling piglet related bric a brac, GinnyVan saw a tiny stuffed piglet and decided to rescue it.  She purchased the pig, named him after the city in which he was discovered, introduced him to me as she attached him to my ribbon collar, and Andre and I became fast friends; we are inseparable. We share crumbs and giggles in the depths of our purse home and are always happy to brave the elements for photo shoots. I can’t imagine traveling without the little guy. 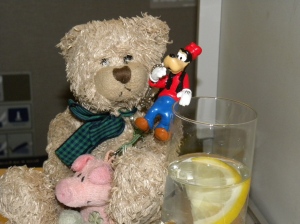 Andre Segovia, Buster and Goofy enjoy a cocktail on the flight to Mumbai.

My newest buddy is Goofy.  Michael gave Goofy to GinnyVan to act as his surrogate on GinnyVan’s trip to India.  Michael didn’t care to go to India but wanted to be a part of the action in some way.  Goofy was the perfect solution.  He fitted in well with Andre and me but I’m not certain we want to travel with him all of the time.  He is a little demanding and, as his name might imply, he can be downright embarrassing.  An example:  Moments after the photos above was taken, he actually dived right into the gin and tonic!!  Yuk! Who wants to drink any of it after he’s been using it as a personal plunge pool?  But, he will be a good addition when we want to liven things up a bit.